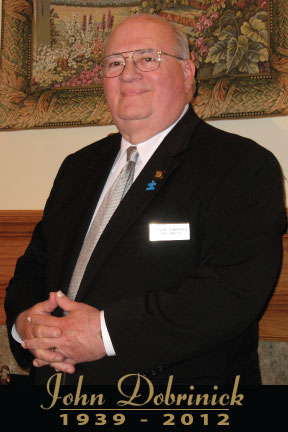 John M. Dobrinick is the founder of the funeral home since 1974. He passed on October 10th, 2012 after a year long battle with cancer and other ailments. John and his wife Bonnie were married for 48 years. Bonnie is still active with the family business helping out where she can. They had two children a daughter Lynn M. Cass and her husband James, and a son Thomas J. Dobrinick. John was very proud of his grandchildren Alex and Maxwell Cass, Hannah and Emma Dobrinick.

Thomas J. Dobrinick has been a licensed funeral director since 1994, licensed insurance agent in the state of Pennsylvania and Notary Public. He currently runs the day to day operations of the business. Tom has two daughters Hannah and Emma Dobrinick. Tom has been a member of the Trafford Fire Co. #1 since 1995 and has served in many roles for the department and is actively involved within the Trafford Community.

Dakota R. Santiago, originally from Trafford, but grew up in Virginia Beach, Virginia has been working for the funeral home since 2011. Dakota is a graduate of Green Run High School (Virginia Beach) and the Pittsburgh Institute of Mortuary Science. She became a licensed funeral director in 2015, and has been a Notary Public since 2018. She is married to Stephen Santiago and they have two fur babies.

A year of daily grief support

Our support in your time of need does not end after the funeral services.  Enter your email below to receive a grief support message from us each day for a year.  You can unsubscribe at any time.